Just a few weeks ago, we treated a dog who had ingested toxic mushrooms. We think this is an excellent case to share with our readers right now given all the mushrooms that are popping up from so much rain. Even more importantly, this story is a great example for people to learn from because once the owners realized what had happened, they took all the appropriate steps to try and help their dog. 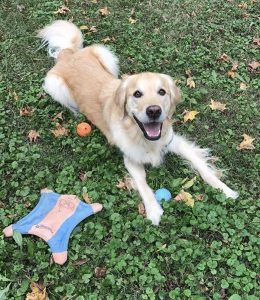 On Saturday, August 25, 2018 at 9:45 AM, Riley’s owners let Riley out into the yard for about five to ten minutes. Riley then came in and ate breakfast. Within about ten minutes, Riley vomited his food back up. The owners noticed several mushrooms in the vomit as well. Riley vomited two more times but no more mushrooms were produced.
At that point, the owners realized they needed to act quickly to not only help their dog, but also get as much information as possible about the type of mushrooms Riley ingested. In a short period of time, Riley’s owners:

Within less than an hour of the mushroom ingestion, Riley arrived at Lawndale Veterinary Hospital. Dr. Burnett immediately examined Riley and induced vomiting with a drug called apomorphine. Riley vomited some more, but no additional mushrooms came out. Dr. Burnett then administered a drug called Cerenia to help Riley not feel nauseous anymore. Bloodwork was performed as a baseline screening and everything was found to be normal. Activated charcoal was also administered as a way to help bind any toxins that may still be in the gastrointestinal tract. It was not immediately clear what type of mushrooms had been ingested based on visual examination of the mushrooms in the clinic. We knew that it was highly probable that Riley had at least ingested a mushroom toxic to the gastrointestinal tract because of how he vomited so quickly after eating the mushrooms at home. Since we did not know whether the mushrooms were a more toxic species that could impact the liver or even lead to death, Riley was also placed on supplements to protect the liver.
Riley was discharged later that morning. Riley did great through the weekend eating a bland diet and taking a gastrointestinal protectant (in addition to the liver supplement). The owners monitored Riley closely for any further problems or symptoms. On Monday (two days later), the owners brought Riley back to the clinic for us to recheck bloodwork. Even though Riley was still feeling great and there had been no further vomiting, we needed to make sure that there had not been any toxic effects of the mushrooms on internal organs. Thankfully the bloodwork looked great and Riley has been fine since! 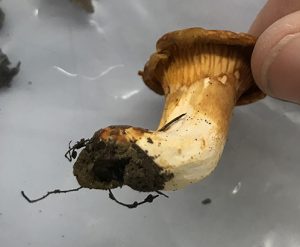 Concluding Thoughts:
First and foremost, we are so thankful that Riley ended up being just fine from the mushroom ingestion. We believe that his owners did everything they could to help him once the ingestion occurred. This is certainly a type of case where quick action needed to be taken. We will leave you with these closing thoughts about mushrooms: