Home
Blog
Diseases & Conditions
Chew On This: The Case Of Dodge Barham, An Australian Shepherd Mix With Masticatory Myositis 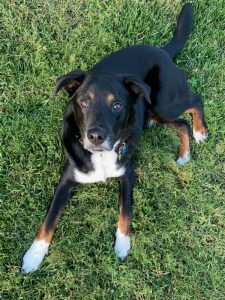 Background: Early last March, Dodge Barham, an Australian Shepherd Mix who was a little over 1 year old at the time, had just been adopted and was brought into Lawndale Veterinary Hospital for his first visit. At that time, Dodge looked great, other than some mild dermatitis, and received a vaccination for leptospirosis.   About a week after his first visit, Dodge’s owner noticed some gray/white mucoid discharge from his eyes and contacted Dr. McGlothlin to let her know and determine if an eye medication would be recommended. After a phone consultation, Dodge was started on some eye drops and the eye discharge improved.

In early April, Dodge was brought back in for his vaccination booster. His eyes looked good, but at that time, the Mr. and Ms. Barham mentioned that over the previous weekend they had noticed a swelling over the top of Dodge’s head, and he would yelp in pain whenever they tried to pet him on the top of the head. The swollen area had gone down, but Dodge now had bad breath and he would only eat canned or soft food and avoided eating his dry kibble. On his examination, Dodge had very noticeable halitosis, but the tartar on his teeth was very mild and there was no gingivitis. Dodge was happy and wagging his tail, but he was very sensitive to having the top of his head touched and would vocalize, even when Dr. McGlothlin barely put pressure on the area. Taking the history of a previous swelling and a foul odor from Dodge’s mouth into consideration, it was suspected that he could have an abscess even though no puncture wound(s) or bruising were noted on his exam. At that point, Dodge was started on a 7 days’ course of antibiotics and a nonsteroidal antiinflammatory. 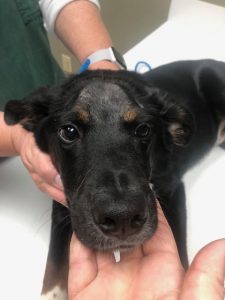 Dodge responded well to the antibiotics and his owner reported that he had done great while on the antibiotics and returned to his normal self and was eating his dry food without any problems.  In mid-April, about a week after being off the antibiotics, Dodge started to be painful whenever the top of his head was touched and his enthusiasm for eating hard food decreased again. Ms. Barham got in touch with Dr. McGlothlin to let her know that, while Dodge did not have bad breath at that time, he was starting to show clinical signs similar to what she had seen at the beginning of the month. An appointment was made for Dodge to be seen the next day.

At the time of Dodge’s follow up appointment on April 16, the temporalis muscles, which are located over the left and right sides of the top of the head were visibly smaller than they had been on his visit on April 1. Dodge’s eyes appeared sunken-in due to the loss of muscle mass and he was painful and vocal when the top of his head was touched. After consulting with the Barhams, a plan was made for Dodge to be dropped off on the morning of April 17 and sedated for dental x-rays. Once he was sedated, a very thorough oral exam was conducted, with no dental abnormalities noted. There was some swelling over the tops of the atrophied temporalis muscles, so skull x-rays were taken instead of dental x-rays. Dr. McGlothlin could not see any evidence of an embedded foreign body or a puncture wound that may have abscessed and the x-rays were then submitted to the board-certified radiologist at Carolina Veterinary Specialists for interpretation. While he was under sedation, punch biopsy samples were taken from the atrophied temporalis muscles and submitted for histopathology. Due to the noticeable atrophy of the temporalis muscles, Dr. McGlothlin suspected masticatory myositis and started Dodge on prednisone while awaiting test results.

What Is Masticatory Myositis? The act of chewing, also known as mastication, is a complex action that results from the interaction of four sets (one set on each the right and left sides) of muscles in the dog: the temporalis muscle, which is positioned over the top of the head; the masseter muscle, which is the large muscle that you can feel at the back of the dog’s jaw; the digastricus muscle, which follows the contour of the lower jawbone; and the pterygoid muscle, which wraps under the back portion of lower jawbone.

Masticatory myositis is the inflammation of the muscles of mastication. This condition can have a very rapid onset, or it may develop more slowly over time and is an immune-mediated disease. While it can occur in any breed, there are several that are overrepresented in case number, including Golden Retrievers, Labrador Retrievers, German Shepherds, Doberman Pinchers, and Cavalier King Charles Spaniels. 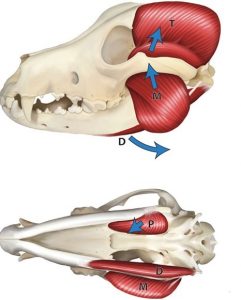 The cellular and genetic mechanisms involved in masticatory myositis are complex; but, to simplify, the muscles of mastication develop from a different embryonic source than the remainder of the skeletal muscles in the rest of the body. Masticatory muscles contain novel fibers, type 2M muscle fibers, that do not occur anywhere else in the body.

Muscle biopsy is considered the definitive diagnostic test for masticatory myositis. In addition to muscle biopsy, there is a blood test that detects and measures the level of circulating antibodies that attack the 2M muscle fibers (these would not be present in a pet that was not attacking its own 2M fibers). The blood test must be conducted on pets that have not started steroids to avoid false negative results.

Back to Dodge: Dodge responded quickly and positively to the prednisone and started feeling better almost immediately. The punch biopsy sample taken from his atrophied temporalis muscle was submitted for histopathological review. The pathologist who reviewed the tissue muscle biopsy found that instead of muscle tissue, the sample consisted of dense reactive connective tissue and regional chronic active inflammation with fibrosis, which had likely replaced the muscle tissue. This finding was consistent with masticatory myositis.

Over the course of about 3 months, Dodge was tapered down and was eventually taken off of prednisone. Dodge came in in late September for his annual exam and heartworm test and looked great! His owners reported that he was back to his old self, eating well and as playful as ever, and had done great since weaning off of prednisone. Although he responded well to steroid therapy and continues to do great, the Barhams continue to monitor Dodge closely for any return of clinical signs consistent with masticatory myositis. While many dogs can be weaned off of prednisone, some dogs do require prednisone for the rest of their lives.