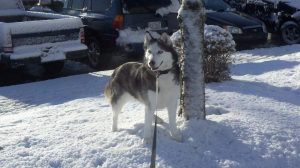 This week, we would like to introduce you to one of our awesome patients named Shayla Culbertson, an almost 11-year-old Husky who weighs about 50 pounds. According to her owner Tara, Shayla is extremely intelligent (almost too smart for her own good), and she loves working on her commands even more than playing! About 3 years ago, Shayla was diagnosed with a condition known as Cushing’s disease. Tara says that thanks to all of Dr. Waterman’s care and attentiveness to Shayla’s symptoms, Shayla’s disease is well controlled.

What is Cushing’s Disease?

As dogs get older, one of the endocrine conditions they can develop is called Cushing’s disease, also known as hyperadrenocorticism. With this disease, the body’s adrenal gland(s) produce excessive amounts of cortisol (steroid). The underlying cause of the excessive steroid production can vary, and the condition can be a little tricky to diagnose. Coming to a diagnosis of Cushing’s disease is a multi-step process that seeks to rule out other medical concerns while also looking for additional confirmatory test results that are consistent with Cushing’s disease.

Before we explore symptoms and diagnostic testing options with Cushing’s disease, it is important to understand the different causes of Cushing’s disease. Remember, a dog with Cushing’s has too much cortisol in the system. This could either be from external steroid supplementation, or from internal production of excessive amounts of cortisol.

What are the Symptoms of Cushing’s Disease?

Ms. Culbertson remembers that in the beginning of Shayla’s illness, she was drinking more, eating more, experiencing loose stools, and having urination accidents in the house.

How is Cushing’s Disease Diagnosed?

For dogs experiencing any of these symptoms, it is important to run baseline labwork (including a chemistry panel, complete blood count, urinalysis, and thyroid level). The labwork will help to rule out other conditions that can present in a similar way, and it may also give additional clues that the dog may have Cushing’s disease. In addition to baseline testing, other diagnostic tests will need to be pursued once the index of suspicion has been raised that the dog has Cushing’s disease. Lawndale Veterinary Hospital typically recommends an abdominal ultrasound and an ACTH stimulation test as the next steps. There are other additional tests that can also be considered, such as a low dose dexamethasone suppression (LDDS) test, a high dose dexamethasone suppression (HDDS) test, a urine cortisol: creatinine ratio, or endogenous ACTH levels.

How is Cushing’s Disease Treated?

If a dog has Cushing’s disease, it is important to understand the underlying cause so that an appropriate treatment plan can be implemented. The different forms of Cushing’s will need to be treated differently. For dogs with iatrogenic Cushing’s, a careful plan of slowly weaning the steroids will help the problem. This has to be done slowly and with caution because abrupt discontinuation of steroids can cause other life-threatening side effects. Adrenal tumors can possibly be treated surgically, but this is a major surgery and many things need to be considered to understand the dog’s probable outcome from the surgery. Pituitary tumors (and some adrenal tumors) can be managed with medications. For example, Shayla takes a medication called trilostane, which works to decrease the excessive cortisol production in the adrenal glands.

Once a treatment protocol has been implemented, careful monitoring and follow-up visits are critical to help the animal have as successful of an outcome as possible. Shayla’s owner has stayed on top of Shayla’s recheck appointments and lab testing. She says that Dr. Waterman discovered a problem through routine bloodwork that needed to be corrected, even before Shayla exhibited any signs from the problem.

Ms. Culbertson encourages anyone who has a dog diagnosed with Cushing’s disease to be patient, keep a close eye on things, follow through with rechecks, and work to understand what their dog may need during their illness. She is thrilled to say that Shayla can still lie around and ‘chill’ and be her regular happy self!