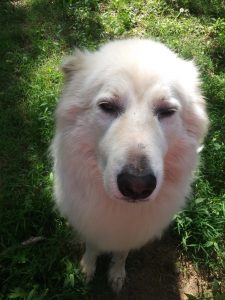 Background: Zill Whitley, a 3.5 years old spayed female Great Pyrenees mix, was brought to Lawndale Veterinary Hospital to see Dr. Crawford on April 15 of this year. She had not been feeling well for almost a week: lethargic, not eating well, and occasional vomiting. On top of all that, Zill had started having problems moving around, with her owners describing her as “hobbling and not wanting to stand.”

When Zill arrived for her examination, Dr. Crawford noticed that she had a very stilted gait, reacted painfully when he manipulated her left carpus joint, which is equivalent to our wrist, and also was very reluctant to let him manipulate her hips. In addition, Zill had a fever of 103.8 degrees Fahrenheit – a dog’s body temperature normally runs between 100.0-102.5 degrees Fahrenheit. Zill had tested positive for Lyme disease on a previous blood test, but had never been symptomatic and, therefore, had never been treated. Dr. Crawford requested some diagnostic bloodwork (a complete blood count and a chemistry panel) and a 4DX test, which is an in-clinic test that we use to detect heartworm disease and the following tick-borne diseases: Lyme disease, Ehrlichiosis, and Anaplasmosis. While there were a few minor abnormalities on Zill’s complete blood count and her chemistry panel, the 4DX test was positive for Lyme disease. Dr. Crawford was suspicious that Lyme disease was the cause of Zill’s clinical signs.

What Is Lyme Disease? Lyme disease, or Lyme borreliosis, is caused by the bacterium Borrelia burgdorferi, a spirochete, or helical-shaped bacterium. Bacterial transmission occurs when dogs are bitten by infected individuals of either Ixodes scapularis or Ixodes pacificus ticks, which are carriers. Immature ticks (either the larval or nymph stages) acquire the bacteria while feeding on wild rodents. As infected immature stages molt and develop into adults, the Lyme bacteria stay with them, passing from stage to stage during the tick’s maturation in a process called transstadial transmission. The Lyme pathogen (B. burgdorferi) is not passed from infected adult females to newly hatched larvae, a process known as transovarial transmission that does occur in some parasitic/infective organisms. 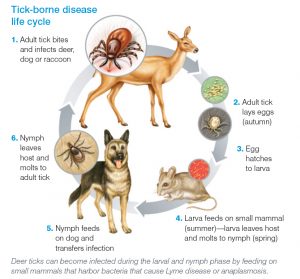 The majority of dogs that are exposed to B. burgdorferi do not develop full-blown clinical disease, but instead maintain subclinical infections. If clinical signs develop, the most commonly encountered acute problems are fever, shifting-leg lameness, swollen joints, lymph node enlargement, inappetence, lethargy and depression. If Lyme disease goes undetected and persists as a chronic disease, it may result in chronic polyarthritis with physical changes in the joints and, most seriously, a condition called Lyme nephritis or glomerulonephritis, in which the kidneys are progressively affected, and which may be fatal.

Back To Zill: Aware of Zill’s history of having previously tested positive for Lyme disease, Dr. Crawford immediately started her on two medications. She was placed on doxycycline, an antibiotic that is effective against tick-borne diseases, and Deramaxx, a non-steroidal antiinflammatory medication to help with Zill’s fever and the discomfort secondary to the inflammation in her joints. Zill’s clinical signs improved within about 24-36 hours of starting the antibiotics and antiiflammatories and Zill is completely back to normal. 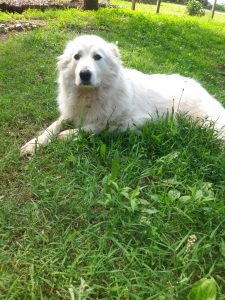 You may be wondering why Zill was not treated with antibiotics when B. burgorferi was initially detected on her 4DX test. This is a controversial topic and the recommendations may change in the future; however, currently the recommendation is that given that the vast majority of dogs who test positive do not develop clinical disease, it is best to conduct additional diagnostics. If Lyme positive dogs exhibit abnormalities in their bloodwork and urinalyses, the next step is antibiotic therapy. If there are no abnormalities on bloodwork and urinalysis, antibiotic therapy is not recommended.

If you are a cat owner and wondering about Lyme disease in cats, there is not a case study for me to write up for you! Interestingly, while cats may test positive for B. burgdorferi, clinical disease has not been described in naturally infected cats. If you are wondering whether or not your Lyme positive pet is contagious to you, rest assured that it is not. You can be infected if you are bitten by the same tick that bit your pet, but the disease cannot be directly transmitted from your pet to you.