Home
Blog
Diseases & Conditions
Flint Davis – Not a Pitty to Pity: Fighting the Battle Against Skin Problems and Allergies 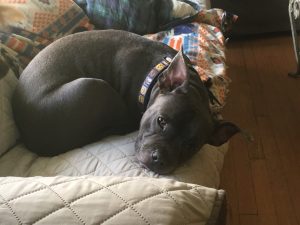 Background: Flint was adopted through Merritt Pitbull Rescue in November, 2016. After his adoption, Flint was brought to Lawndale Veterinary Hospital for a new pet exam. At that time, Dr. Jelovich noted a few abnormalities on Flint’s physical exam, including: the presence of a heart murmur; undescended testicles; and a large focal patch of infected skin, or superficial pyoderma, on his right side.

Initial Diagnosis: Once Dr. Jelovich had examined Flint, she used a diagnostic tool commonly used in dermatology cases, the impression smear, to determine what types of microscopic organisms (in Flint’s case, bacteria) might be affecting the patch of skin. Flint was started on a course of antibiotics commonly used to treat skin infections and the skin improved.

Case Progression: Follow-up visits with Dr. Noureddine found that the original patch of skin was improving, but bacteria were still present. Additional affected patches of skin were popping up and Flint’s ears were also starting to bother him. During those follow-up visits, additional diagnostics, including skin scrapes and ear discharge analyses were performed. Flint was found to have demodicosis, also known as demodex mange or “red mange,” and an ear infection. Flint’s course of antibiotics was modified and the length of the course was extended, ear medications were added in, Flint was started on medication for the demodicosis, and he was also started on twice weekly medicated baths. After about 3 months, Flint’s skin problems stabilized.

Over the course of the next 1.5 years, Flint’s skin and ear issues waxed and waned and he was treated episodically with antibiotics, topical ear medications and medicated baths. Flint was placed on limited ingredients diets, but his skin issues persisted. In February, 2018, Dr. McGlothlin and Brandon Davis, Flint’s owner, discussed sending blood off for regional allergen testing. Flint’s itch had remained difficult to control with antihistamines, so he was started on a new medication, Apoquel, which belongs to a class of drugs called Janus Kinase (JAK) inhibitors, while awaiting the results of serologic allergy testing and the itching improved.

Immunotherapy:  Allergy testing can be done by one of two methods: 1) Intradermal skin testing, in which a variety of different allergens are injected into the shaved skin of one side of the lateral chest and the injection sites are monitored for inflammatory reactions; and 2) Serologic allergy testing, in which a blood sample is drawn from the pet and submitted to a laboratory where levels of antibodies to particular allergens are measured. 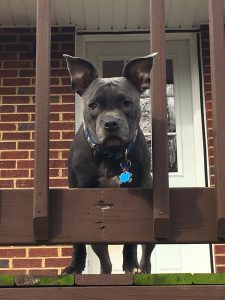 Once specific allergens have been identified by testing, allergen specific immunotherapy (allergy shots or sublingual drops) may be started in an attempt to desensitize the body to reduce the intensity of allergic responses or even extinguish the response entirely. These treatments involve exposing the pet to either injections or drops placed under the tongue that contain gradually increasing concentrations of the particular allergens that were identified during testing. About 50% of dogs that go through immunotherapy have excellent response to therapy, while 25% have partial response and 25% do not respond to immunotherapy treatment. Immunotherapy is an excellent tool to have in our fight against allergies, but the response is not immediate and patience is necessary.

Case Update: In Flint’s case, he was found to have very elevated levels of antibodies against two different types of dust mites and two different types of storage mites, and moderate elevations to some local insects, including mayflies. Flint was started on a custom mixture of sublingual drops, which are placed under the tongue daily. Flint’s response to immunotherapy has been positive and his skin issues are improved, but he does periodically have to take Apoquel for relief, if his itching flares up. Allergy testing was helpful to improve Flint’s skin and ear problems and his owners deserve kudos for monitoring him closely and pursuing advanced diagnostics to help Flint in his fight against his allergies.