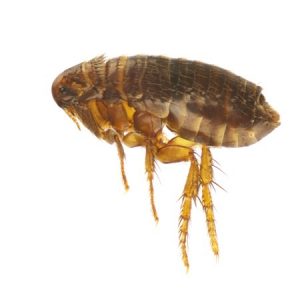 Are you tired of hearing about fleas? Perhaps you are tired of your pet having fleas? Whether you just want to learn something you haven’t heard before, or you need some pointers to get rid of those fleas, this blog is just for you!

Fleas are wingless insects that are known for their impressive jumping ability. In one study that evaluated jump performances of C. canis and C. felis, the highest jump recorded for C. canis was 25 cm, and the highest jump recorded for C. felis was 17 cm. The maximum length jump was 50 cm for C. canis and 48 cm for C. felis (2). If you think about the fact that an average female flea is 2.5 mm long, those heights and lengths are quite impressive feats! A common misconception is that Ctenocephalides fleas constantly jump on and off their host. Actually, they prefer to stay on their dog or cat host unless population numbers get too high (around 200 fleas) (1). The jump is propelled through highly elastic pads of protein called resilin. Just before jumping the flea will compress the resilin pad, and as they release the leg muscles to jump, the rapid expansion of the resilin pads gives the flea a huge burst of energy that catapults them through the air.

Body Structure Made for Sticking with the Host:

The flea body is flattened laterally, allowing the flea to weave through hair and fit into tight spaces (this can help them avoid the host grooming or scratching them off). The exoskeleton is heavily chitinized (hardened), which helps the flea to withstand high pressures (isn’t a flea difficult to squish?). The flea is also covered with bristles and spines that aid the flea in avoiding removal attempts.

Fleas have a holometabolous life cycle, which means they go through a complete metamorphosis: from egg, through three larval stages, then pupa, and finally adult. Female fleas are anautogenous, meaning they must first take a blood meal from the host before they can produce eggs. Female fleas can then produce 40 to 50 eggs per days. Most adult fleas will survive for 2 to 3 months. The eggs will hatch in about 5 days. The larval stages will feed on organic matter and adult flea feces. The flea feces looks like dirt, but it is rich in blood from the host. Flea larvae will not develop outdoors in the direct sunlight, so shady areas where pets tend to rest will be more heavily infested. Indoors, the larvae will develop in undisturbed areas of the carpet, along baseboards, in hardwood floor cracks, furniture crevices, etc. The larvae will then form whitish pupae. Adults will typically emerge 8 to 13 days later in appropriate environmental conditions.

Infestations that are Problematic:

With adults living 2 to 3 months, and females producing 40 to 50 eggs per day, populations of fleas will build up fast. At times, adults may be difficult to find because the dog or cat has groomed them off, or the fleas are hiding in the thick fur. Inspecting the animal using a flea comb can help catch the adults and also grab flea feces. Flea feces can often be found on the back (especially near the tail area) and on the underside. If you find something that looks like dirt, put the substance on a white tissue or cotton ball and moisten. If a halo of red appears around the substance then this is consistent with flea feces (flea dirt). Once a flea infestation is established, it can take 2 to 3 months to fully control the situation. This is because the pupae can remain quiescent if they are not exposed to appropriate environmental stimuli. This will cause a delay in adult emergence (1,3).

The best ways to address flea problems are to use multi-modal strategies, and keep all dogs and cats in the house on year-round flea prevention. A multi-modal approach can include using products that kill adult fleas (there are a variety of these products available in both oral and topical formulations), products that break the flea life cycle, decontaminating the environment regularly and thoroughly, or even using environmental control products depending on the severity of the problem. It’s important to remember that if one pet in the house is diagnosed with fleas, all pets in the house need to be treated. Otherwise, the flea infestation will continue.

Having comfortable pets and a flea-free environment are certainly reasons enough to prevent fleas, but it’s also important to remember that fleas cause other medical issues. Some animals will be hypersensitive to the flea saliva and so they will develop intense itching, or even secondary skin infections. Some humans can be hypersensitive to flea bites as well. Fleas can vector many diseases that are zoonotic (can be transmitted between animals and humans). Examples include cat scratch disease (Bartonella henselae), murine typhus, flea-borne typhus, tapeworms, and bubonic plague (from rodent fleas).

Don’t let fleas ruin your summer – talk to us now about flea control options for your pets!