Background: Grayson Parker, an 11 year old, castrated male Domestic Shorthair cat was diagnosed with diabetes in November of 2017. His disease was regulated daily through the use of twice-daily insulin injections, with frequent visits to Lawndale Veterinary Hospital to monitor blood sugar levels and other bloodwork values.

On June 20, 2019, Grayson went missing from his home after a severe thunderstorm. At the time of his disappearance, Grayson’s diabetes was relatively well-regulated and he had weighed 9.3 pounds at his visit with us in April of 2019. A little more than two months after he went missing, Grayson was found and taken to Gate City Animal Hospital, where he was scanned for a microchip. His microchip number allowed the veterinarians at Gate City to access contact information for Grayson’s owners, the Parker family.

Two months after having gone missing, the Parkers were happily reunited with Grayson. While he had been missing, Grayson’s diabetes was, of course, untreated. At the time of his disappearance, he had weighed in at 9.3 pounds and he was getting 2 units of insulin twice daily.  When Grayson was found, he had lost almost three pounds, weighing in at 6.5 pounds!

Grayson was emaciated in appearance, had diarrhea and was markedly dehydrated. On his return home, his appetite was healthy – he was eating canned food and boiled chicken voraciously – and he was drinking a lot more than normal. Dr. Burnett ordered bloodwork and a urinalysis to evaluate the status of Grayson’s diabetes, as well as check the functions of his other organ systems, since he had been on his own for several weeks. The diagnostics that Dr. Burnett ordered enabled her to determine that Grayson’s blood glucose (“blood sugar”) was elevated at 448 mg/dl (the normal level of glucose in a cat’s blood is 80-120 mg/dl). In addition, he had a large amount of glucose in his urine, which is the usual finding in uncontrolled diabetics and can lead to a urinary tract infection if left uncorrected. Remarkably, there were only a very few minor changes in the rest of Grayson’s bloodwork and urinalysis. 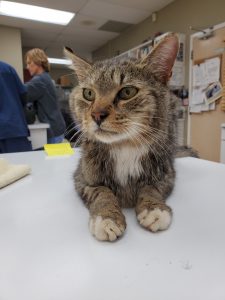 Case Progression: Dr. Burnett started by giving Grayson subcutaneous fluids to help correct his dehydration, getting him on an antidiarrheal medication, and starting his insulin again, at a dose of 1 unit twice daily. At last check, Grayson is on the mend and his health is steadily improving – he has gained some of his weight back and is feeling well. He is currently dealing with persistent GI issues and working with both Drs. Burnett and Crawford to resolve them.

Why Microchip? As this case illustrates, having a microchip placed in your pet can be its ticket home and, in the case of Grayson Parker and other pets with illnesses that require life-long medications, can save its life. An estimate provided by the American Humane Association indicates that more than 10 million pets go missing from their homes each year. Only a small fraction of these pets is returned home and a registered microchip drastically increases the chances that a lost pet will be reunited with its family.

A microchip can be placed during a routine visit with your veterinarian. The chip itself is a small transmitter (about the size of a grain of rice) that is inserted beneath the skin between the shoulder blades, using a large-bore needle. Microchips do not transmit information on their own. A scanner is passed over the skin, picks up a signal emitted by the chip and reveals a unique registration number for that particular chip.

The identification number of a particular chip is the only piece of information encoded on the chip, there is no personal information about either the pet or the owner contained in that transmission. The identification number is then used to determine what microchip registry needs to be contacted to locate a particular pet’s information and its owner’s contact information. It is important to understand that a microchip is not a location device, it is an identification device. While there are GPS collars available for pets, there are currently no GPS chips. This is why it is imperative that you register your pet’s microchip and keep that information up to date. Remember to update your pet’s microchip registration information if you move or if your phone number changes, just like you do for yourself.

We are so happy for Grayson and for the Parkers, their story had a happy ending. You can help safeguard your pet by microchipping and keeping its information up to date. If you have any questions about microchipping or would like to schedule microchip placement for your pet, call us at Lawndale Veterinary Hospital!

Microchipping Could You’re your Pets Life