Home
Blog
Pet Safety
He Has A Confection To Make – He Ate ALL The M&Ms! Mid-Knight Jones: The Candy-Loving Puppy 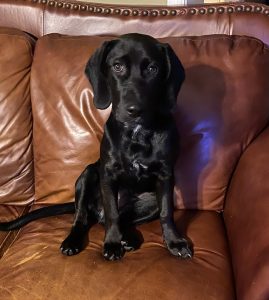 Background: Mid-Knight Jones, a Labrador Retriever Mix puppy, had just seen Dr. Crawford for his last puppy visit on December 8, 2020. He’d gotten a little car sick on the way home after his appointment and Dr. Crawford had treated that as a possible vaccine reaction, but over-all he was doing great at home and had passed his physical exam with flying colors.
On December 9, 2020, Mid-Knight’s owners caught him in the act of eating chocolate, estimating that he had ingested about 5 ounces. They called Lawndale Veterinary Hospital and Dr. Jelovich determined that it would be in Mid-Knight’s best interest to be seen for chocolate ingestion in order to avoid potential chocolate toxicosis.

Happy Valentine’s Day! With Valentine’s Day coming up, it’s not a bad idea to have chocolate toxicosis on your radar. If you suspect that your pet has ingested chocolate, don’t hesitate to give us a call. If you have an estimate of the amount of chocolate your pet has eaten, we can calculate an estimate of the amount of theobromine and caffeine that was ingested and make a recommendation to be seen if your pet is at risk for chocolate toxicosis. It’s also good to remember that there may be other toxic ingredients in the chocolate, including raisins, macadamia nuts, the artificial sweetener, and xylitol that need to be mentioned. We know it’s tempting to share holiday treats with your pets, but this year, why not give them heart-shaped dog biscuits instead of chocolates? They may protest, but they will thank you for it later.

Brutlag, A. Chocolate Poisoning In Dogs.