Home
Blog
Diseases & Conditions
He Really Should Have Studied For His Prostate Exam: Samson Hardy, A Labrador Retriever With Prostatitis

Background: In mid-April of this year, Samson Hardy, 12.5 year old intact male Labrador Retriever, was brought in to see Dr. Crawford. Samson had enjoyed a great weekend: eating well, playing with the children in his family, and running all over the farm. By Monday morning, Samson’s appetite was drastically decreased and he was very lethargic. While Samson was able to walk and to move around without assistance, he was reluctant to do so.

Dr. Crawford gave Samson a thorough physical examination and found him to be running a fever of 104.3. His heart rate was higher than usual, but overall his physical appearance was within normal limits for a dog his age. When Dr. Crawford did a rectal exam on Samson, he seemed to be straining as if he needed to defecate and Dr. Crawford could not palpate is prostate gland at all. 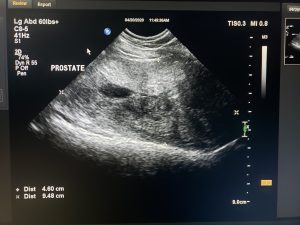 The Hardy’s consented to Dr. Crawford’s request for diagnostics in order to determine the source of Samson’s fever, lethargy, and inappetence. His chemistry panel was unremarkable and his heartworm test was negative, but Samson’s complete blood count had some concerning abnormalities, including an slight non-regenerative anemia and a high white blood cell count consistent with an infection. Samson’s urinalysis revealed that he had a large number of white blood cells, red blood cells, and rod-shaped bacteria. Since Samson is an intact male, Dr. Crawford wanted check Samson’s prostate and since he could not palpate it during a rectal exam, he used ultrasound to visualize the gland. He found that Samson’s prostate gland was greatly enlarged and contained a cavitary center, which is not normal (the prostate gland should be solid in appearance on ultrasound). At that point, Dr. Crawford was able to diagnose Samson’s prostatitis.

Back to Samson: Once Dr. Crawford was able to determine the cause of Samson’s clinical signs, he went to work determining the appropriate treatment. With the presence of rod-shaped bacteria in the urine, it was assumed that Samson’s prostatitis was the result of an ascending infection from the urinary tract. The urine was submitted to Idexx Laboratories for urine culture and sensitivity testing to determine which antibiotics would be effective in treating Samson’s infection. Samson was immediately started on an antibiotic, with the understanding that an antibiotic change may be necessary, based on the results of culture and sensitivity testing.

Fortunately, the bacteria causing the infection were sensitive to the antibiotic that Dr. Crawford originally started Samson on and he remained on that antibiotic for 6 weeks. Samson is currently doing well and will be seeing Dr. Crawford for follow up ultrasound of his prostate and to determine additional treatments or procedures.