Home
Blog
Diseases & Conditions
Hit Me With Your Laser Beam! How Laser Therapy Helped Oscar Meech With His Arthritis 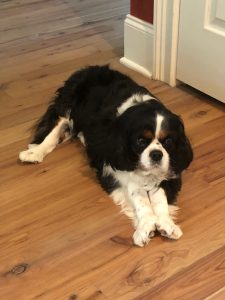 Background: Oscar Meech, a nine-year old male Cavalier King Charles Spaniel, was seen at Lawndale Veterinary Hospital last December for a lick granuloma on the carpal region (this corresponds to our wrist) of his left front leg. Although Oscar had a history of allergies and itchy skin, his overall skin condition was healthy at that time and his owner reported that he did not seem significantly pruritic (itchy). The only area of skin that seemed to be affected was the single focus over the left carpus.

In addition to chronic skin/allergy issues, Oscar had started to exhibit some symptoms consistent with significant arthritic change and had been prescribed gabapentin to help relieve arthritic pain. There were several regions of his body where Oscar seemed to be painful, including his lumbar spine and both the right and left carpal regions. When he was examined, it was noted that both of Oscar’s carpal regions were visibly swollen in appearance and when they were flexed and extended, crepitus – a crackling or grating feeling indicating cartilage or bone wear – was noted. Oscar’s owner noted that he had become less interested in activity and would lie around a lot, even though he was receiving his medication for pain relief. Jenny Allred, Technical Team Leader at Lawndale Veterinary Hospital, groomed Oscar regularly and had noticed that he would often suddenly collapse on her grooming table, had become progressively weaker over time, and was more painful when his front paws and front legs were manipulated during grooming. 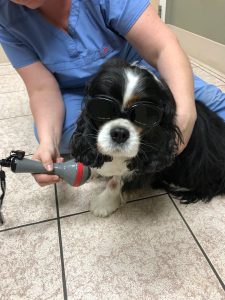 Oscar wearing safety goggles or doggles during a laser treatment.

Jenny alerted Dr. Crawford to the progression of Oscar’s problems and asked him to evaluate Oscar. After evaluation, it was recommended that Oscar begin serial laser therapy treatments with the Companion Therapy Laser at Lawndale Veterinary Hospital. The rationale behind this recommendation was that this therapy could improve the painful areas along Oscar’s spine, as well as both inflamed carpal joints and the skin over the painful left carpal joint, where Oscar had been licking to try to get some relief.

What Is Laser Therapy and What is It Used For? Laser therapy involves the use of light energy to induce photobiomodulation – the process in which electromagnetic energy interacts with biological tissue to produce chemical and biological change. While laser therapy seems to be the most commonly used term for this procedure, it is used interchangeably with photobiomodulation therapy.

While the science of laser therapy is complex, it involves the production of a monochromatic (made up of a single wavelength) beam of light that is composed of photons that travel in the same phase and direction without divergence. This beam can be focused and penetrate the skin to treat a specific small area of tissue without causing damage to surrounding tissues and overlying skin. 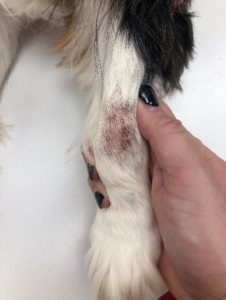 Photobiomodulation results in complicated changes at the cellular level that can lead to reduction in pain and inflammation, accelerated healing, and promotion of tissue regeneration (Godbold, 2019). For these reasons, laser therapy/photobiomodulation therapy has been used in veterinary medicine for treatment of osteoarthritis, soft tissue injuries and inflammation, pain management, and wound healing. While there are many conditions that can benefit from this procedure, there are times when laser therapy is contraindicated. Laser therapy can accelerate the growth of tumors and should never be considered if there is a possibility of targeting cancer cells.

Update on Oscar: Oscar received laser therapy over his carpal regions twice weekly for three weeks. He continued to receive pain medications during that time. Oscar made rapid improvement, becoming very playful and not limping shortly after his laser treatments were started. By the time Oscar’s treatments were completed, his carpal joints were less swollen and his owner reported that he was much more spunky than he had been before laser therapy. This series of photographs documents the progress that resulted from this treatment. Oscar was more comfortable and active, and no longer licked at the left carpus so the skin improved and his hair grew back in that area.

There are a variety of conditions that can be improved with laser therapy. If you would like to consider this for your pet, please contact us at Lawndale Veterinary Hospital to set up an examination or consultation.

Dycus, D. 2014. Laser Therapy in Companion Animals: What It Is, How It Works, and When It Benefits Patients.