In mid-October, Johnny Cash, an eight-year-old rescued chihuahua mix was enjoy his regular bath. He gets his bath in the shower at home and was all lathered up with shampoo when a bit of a problem developed! Two of the soapy toes on Johnny Cash’s right hind leg slipped between the spaces in the grate of the shower’s drain cover and became tightly lodged in there.

Johnny Cash’s family tried to free the lodged toes from the grated shower drain cover, but their attempts were unsuccessful. They called Lawndale Veterinary Hospital and were told to bring Johnny Cash in immediately, as the longer his toes remained stuck in the drain, the more swollen and painful they would likely become. When Johnny arrived, Dr. McGlothlin initially attempted to apply a generous amount of lubricating gel onto the toes and sliding the lodged toes out without sedation. However, Johnny Cash’s toes were already too swollen to allow for this and it was too painful for him to endure without sedation. 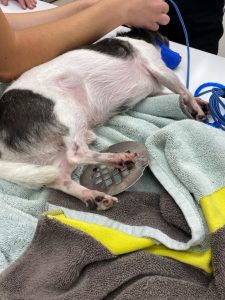 Johnny Cash was given an injectable sedative that also provided pain control. A local anesthetic, lidocaine, was injected over the top of the foot to provide additional pain control This sedative did not render him entirely unconscious but allowed for some manipulation of the toes. Even though Johnny Cash was relaxed and not painful, he was still mobile enough the prevent removal of the drain cover from the foot. For this reason, Johnny Cash was placed on flow-by isoflurane (a gas anesthetic) to provide a deeper level of anesthesia. 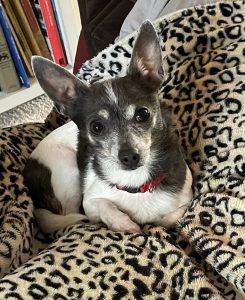 Once the appropriate plane of anesthesia was reached, Dr. McGlothlin was able to use a pair of metal cutting shears (provided by the owner) to cut the grate of the drain cover and free the trapped toes without complication. Johnny Cash’s toes were slightly swollen and red and there was a small, shallow wound on the skin where the toes had scraped the metal when they slid between the grating. The wound was cleaned with chlorhexidine and then the anesthesia was reversed and Johnny regained consciousness quickly. Once alert, Johnny Cash was sent home with anti-inflammatories and a brief course of antibiotics to keep his skin wound from developing an infection and me he made a complete recovery!