Background: Back in late August 2020, Lola Lippitt’s owner noticed that Lola was not walking on her left hind limb in a normal fashion. At first, Ms. Lippitt noticed that Lola would not use her left hind limb at all and was only using her other three legs to get around. This was not something that was altogether unfamiliar, as Lola had injured her right hind limb back in 2018 and had required surgery to repair the damage to her stifle (the equivalent of our knee) at that time. While the limping improved some over the course of the next few days, Lola remained uncomfortable, so on September 1, she was brought in to see Dr. Waterman. 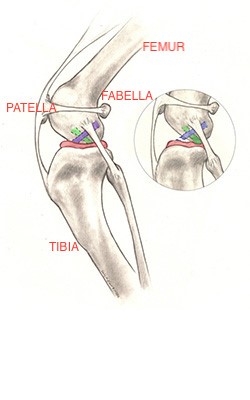 At the time of her examination at Lawndale Veterinary Hospital, Lola had pain, mild swelling, and crepitus (a cracking, grinding sensation that can be felt when an injured joint is moved through its normal range of motion) over the left stifle. When Lola was in a sitting position, she would not pull her left hind leg up under her hips as an uninjured dog in a sitting position would do. Instead, Lola was sitting with her left hind leg extended out to the side to keep from flexing her injured left stifle. Based on her physical exam findings, Dr. Waterman requested x-rays of Lola’s left stifle and was able to see radiographic evidence of a partial tear of Lola’s cranial cruciate ligament.

Overview of the Stifle Joint: The stifle joint, which corresponds to the knee, is illustrated in a diagram taken from the Colorado State University Veterinary Teaching Hospital website (Figure 1). This complicated joint is located at the junction of the femur (thigh bone) from above, the tibia (shin bone) from below, the patella (kneecap) in front and the fabellae (small bean-like bones) from behind.

Cartilaginous cushions, the medial and lateral menisci (shaded pink in Figure 1), are positioned between the femur and tibia. There are multiple ligaments and tendons that are wrapped over and around the stifle joint to provide exterior stabilization while allowing the knee to bend the way it should. Two cruciate ligaments cross inside the stifle joint: the cranial cruciate ligament, which is illustrated in purple, and the caudal cruciate ligament, which is illustrated in turquoise. These ligaments provide stabilization of the knee by connecting one side of the femur to the opposite side of the tibia, forming an “X” where they cross – this is where the term “cruciate” comes from.

When the cranial cruciate ligament is completely torn, the stability of the stifle joint is compromised and your veterinarian may be able to detect the extent of the injury by demonstrating abnormal motion of the knee. One abnormal movement, called the drawer sign, occurs when the veterinarian stabilizes the position of the femur with one hand and is able to move the tibia forward, like a drawer being opened.

Back to Lola: In Lola’s case, neither Dr. Waterman nor Dr. Crawford were able to elicit a drawer sign. Since the knee felt stable in spite of Lola’s lameness, Dr. Waterman requested radiographs of the area and that is where Dr. Waterman was able to determine that Lola’s cruciate ligament was injured/torn enough to cause an abnormal appearance in the stifle joint, but not enough to result in instability of the joint. Once Lola’s radiographs were completed, Dr. Waterman was able to visualize a “fat pad sign,” which occurs when the part of the stifle joint is damaged and fluid gets into an area where it is not normally present, compressing the fat pad located just below the patella. Figure 2 shows Lola’s radiograph, with the fat pad sign highlighted.

Based on her findings, Dr. Waterman prescribed anti-inflammatory and pain relief medications, and exercise restriction. In spite of medical management, three days later, Lola’s owner reported that Lola was now holding her left hind limb up almost constantly. When she was brought in for a follow-up visit, it was determined that the tear in Lola’s cranial cruciate ligament had advanced from a partial tear to a complete tear. There was a positive drawer sign when Lola’s left knee was manipulated. Since Lola had gone through the same injury on the right side about a year prior to this injury, her owner elected to get Lola scheduled for a type of repair surgery, the tibial plateau leveling osteotomy (commonly referred to as TPLO). 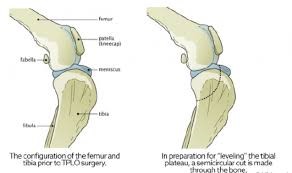 Figure 3. On the left, the stifle before TPLO surgery. On the right, the stifle once the cut is made to level the top surface of the tibia.

What Is Tibial Plateau Leveling Osteotomy (TPLO)?: This surgery was developed about 20 years ago for large breed dogs with cranial cruciate ligament injuries. The result of this surgery changes the dynamics of the stifle in such a manner that the torn cruciate ligament is no longer a factor in the stability of the joint.

During this surgery, a semicircular cut is made extending from the front and top of the tibia, extending down and toward the back side of the bone (see Figure 3). Once the cut has been made, the contact surface of the tibia is rotated to change the angle so that the stifle is stabilized and the ligament is no longer involved in stabilization. Unlike in human cruciate surgeries, the cranial cruciate ligament itself is not repaired. After the appropriate rotation, which is determined through a series of pre-operative radiographs and calculations, a bridging bone plate and screws are placed to support the tibia during healing (see Figure 4). Once the bone has healed, the bone plate and screws are not necessary for stability; however, they are typically not removed unless there are problems. 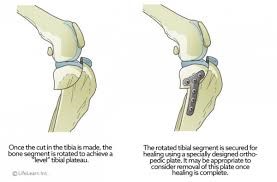 Figure 4. On the left, the tibial plateau has been rotated to provide stability to the stifle. On the right, a bridging bone plate and screws have been placed to support the bone during the healing process.

Once again, back to Lola: TPLO surgery is very complicated and requires special training and certification before a surgeon can perform this procedure. The veterinarians at Lawndale Veterinary Hospital work with board-certified surgeons who have been trained and certified and who come into our hospital to perform the procedure here. Lola’s surgery was performed at our hospital on September 14 and you can see Lola’s post-operative radiograph in Figure 5. At her last recheck, she was doing great, using her leg well, and had good range of motion and good stability in the left hind limb. 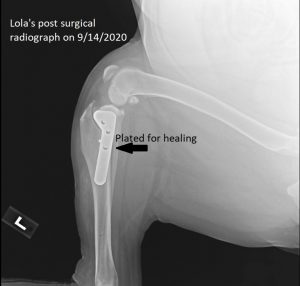 There are several methods of stabilizing the stifle when the cranial cruciate ligament is torn, TPLO is just one. If your dog has a lameness in one of the hind limbs and you feel that he/she needs to be evaluated to determine the cause and to discuss the options, please give us a call and schedule an appointment.