Home
Blog
Diseases & Conditions
Making The Best Out Of Some Bad News: Bonnie Blue West, A Great Dane With An Intestinal Tumor 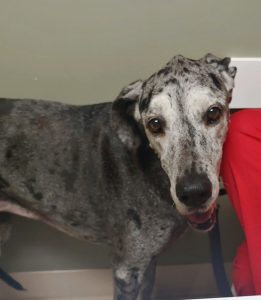 Background: In the fall of 2019, Bonnie Blue West’s owner had noticed a change in her older Great Dane and felt like she needed to see Dr. Jelovich. Bonnie Blue had been on meloxicam, a nonsteroidal anti-inflammatory medication, for chronic osteoarthritis, but recently Bonnie Blue had started having neurological problems, knuckling over on the top of her front left paw, and showing delayed conscious proprioception (awareness of the position of one’s body in space) on that same paw. On top of her concerning neurological issues, Bonnie Blue had become noticeably thinner – she had not been eating well for a good part of the month October and on the day before her visit with Dr. Jelovich, she had not eaten at all. Dr. Jelovich noted the neurologic issues and also noted that Bonnie Blue had lost a large amount of weight since her last visit. Ms. West consented to Dr. Jelovich’s request for bloodwork to see if there were any abnormalities that might help elucidate any problems causing Bonnie Blue’s inappetence and weight loss.

Bonnie’s Blue’s bloodwork was relatively unremarkable. She had a mild elevation in alanine aminotransferase (ALT) – an enzyme made by the liver and an indicator of cellular damage to the liver, and a mild elevation in neutrophils – white blood cells that increase in number in times of inflammation and infection. At that point, Dr. Jelovich began treatment for Bonnie Blue’s gastrointestinal issues with omeprazole, a proton pump inhibitor that decreases stomach acid production and sucralfate, a coating agent that protects the lining of the esophagus and stomach.

When Dr. Jelovich called to check in on Bonnie Blue a few days after her visit, she had more energy and her appetite was a little improved. By about a week after the follow-up call, however, Bonnie Blue was not eating again. It was recommended that Bonnie Blue return to Lawndale Veterinary Hospital for imaging, including both radiographs and ultrasound. During that follow-up examination, an abnormal area was noted on the abdominal radiographs and an abdominal mass was then located near the left kidney using ultrasound. The origin of the tumor could not be determined; however, once the mass was discovered, a fine needle aspirate was performed to collect cells from the mass and the sample was submitted to a pathology laboratory for evaluation and identification.

Abdominal Masses: The abdominal cavity houses large portions of the gastrointestinal tract, the reproductive tract, and the urinary tract, as well as nerve, circulatory and lymphatic tissue. Masses can develop in any of these systems, just like they can in humans. And, just as in humans, masses can be either benign or malignant.

The options for treating abdominal masses are, of course, dependent upon the origin /location of the mass, the determination whether the mass is discrete or infiltrative, and the extent to which the mass has invaded or impeded normal tissue. Surgery is typically the initial recommendation, if it can be determined that the tumor is operable. There are some types of abdominal masses in which surgery is not recommended, and other options may include chemotherapy, radiation, or a combination of those.

Update: The histopathology from Bonnie Blue’s fine needle aspirate came back as either carcinoma or sarcoma – both types are malignant. At that point the origin of the mass was still undetermined, so Bonnie Blue was taken to Carolina Veterinary Specialists in Greensboro for an additional ultrasound. The second ultrasound was not diagnostic, but the mass was noted not to be associated with the spleen, left kidney, adrenal gland, or liver. The recommendation was made for thoracic (chest) radiographs before attempting surgical removal because several types of cancers metastasize to the lungs. Dr. Jelovich had ordered chest radiographs prior to Bonnie Blue’s visit to Carolina Veterinary Specialists and there was no evidence of metastasis, so Bonnie Blue was scheduled for surgery at Lawndale Veterinary Hospital.

Dr. Jelovich and Dr. Crawford scrubbed in together for Bonnie Blue’s exploratory laparotomy and were able to quickly locate a baseball-sized abdominal mass associated with the omentum of the small intestine. The mass did not apparently originate from the small intestine but was tightly adhered to it. A six-inch portion of Bonnie Blue’s small intestine was removed along with the mass, in order to get sufficient margins. The tissue was submitted for histopathology and the mass was determined to be a gastrointestinal stromal tumor, which was the best-case scenario for Bonnie Blue’s long-term prognosis.

Bonnie Blue recovered uneventfully and has been doing well since her surgery with periodic monitoring via ultrasound to check for recurrence. Just this week, Bonnie Blue was not feeling well and was in for an abdominal ultrasound, which determined that there was no evidence of recurrence of cancer, but some early changes in the thickness of the gastrointestinal tract consistent with inflammatory bowel disease, so she will begin therapy for IBD this week.

Bonnie Blue’s case is a reminder of how a worrisome diagnosis can lead to treatment, recovery and a good quality of life. Clinical signs usually seen with gastrointestinal tumors include weight loss, decreased appetite, vomiting, diarrhea, and blood in the vomit or stool. While these symptoms are often associated with ordinary gastrointestinal upset, prolonged presence of any or a combination of any of these symptoms may indicate a more serious underlying illness. If your pet has been showing symptoms of gastrointestinal distress for a prolonged period of time, please do not hesitate to contact us and schedule an appointment for evaluation.

Intestinal Tumors In Dogs and Cats