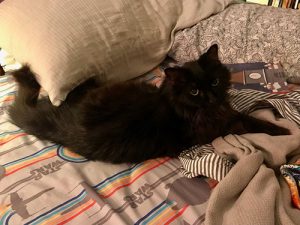 Case History: Otto’s owner brought him in for an examination on September 19, 2018 because he was drinking a lot of water and urinating larger volumes of urine.

Findings: Otto had lost 1.5 pounds since his last visit. Dr. Jelovich performed labwork, where it was discovered that Otto’s blood glucose was 650 milligrams/deciliter (normal range is 71-159). He also had a large amount of glucose in his urine.

Case Management:Otto was started on 2 units of insulin given subcutaneously twice daily. His owners were instructed to gradually transition him to a new diabetes diet called DM.

Otto returned to the clinic 8 days later for a blood glucose curve. Blood glucose measurements were taken every 2 hours throughout the day to see how well the insulin was working to bring the high glucose values down closer to normal. By the end of the day, it was determined that Otto’s blood sugar was still too high (although it had improved from his original value), so the insulin dose was increased to 3 units twice daily.

After another 14 days, Otto came back to the clinic for another glucose curve. Otto had improved dramatically at home. He was eating well and gaining weight, and he was no longer drinking too much or urinating such large volumes. The glucose curve showed Otto’s blood glucose values were actually staying too close to the low end of normal range. The decision was made to cut back on the insulin by 0.5 units.

Otto is due to have another blood glucose curve checked in mid-November!

Would You Recognize Symptoms of Diabetes Mellitus?
Symptoms can include:

Diabetes Mellitus Can Cause Pets to Become Very Sick:
As you can imagine, if the blood sugar is not able to get into the cells for energy, the body must find another way to provide energy for cellular functions. Left untreated, diabetes mellitus can cause the body to switch over to breaking down fat as an alternative energy source. As fat is broken down, ketones (a product of fat metabolism) will rise. This can make the pet feel very sick and create a situation called diabetic ketoacidosis. This situation requires emergency treatment and hospitalization for diabetic animals.

Do You Have a Pet Displaying Any Signs Consistent with Diabetes Mellitus?

If you have any concerns about your pet, then schedule an appointment with one of our doctors. We can talk through your concerns, perform a thorough physical examination on your pet, and perform lab work if needed. Diabetes is a diagnosis that can be made based on history, physical examination, and lab testing.