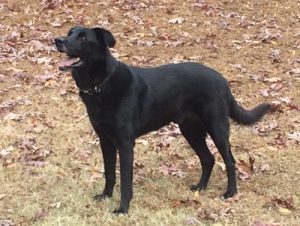 This week, a very special story unfolded at Lawndale Veterinary Hospital about a dog named Spike. Since Friday, December 2nd is National Mutt Day – we thought this would be the perfect week to share this heartwarming story with all of our readers. And if you have been thinking about adopting a dog recently, perhaps it might even stir a heartstring for you to consider an older dog in need of a forever home.

Spike is a 79 pound, black German Shepherd-Labrador Retriever mix. In February 2015, the SPCA took in Spike. We don’t really know anything about his history prior to his arrival at the SPCA, but we do know he was already almost 7 years old. For the next 21 months, Spike spent his days with the SPCA. Sometimes a foster parent was able to keep him in a home, but he was in the kennel for the rest of the time. During his time with the SPCA, the staff loved on Spike. He became a favorite to one of the caregivers name Natalie. She would give him extra walks and attention whenever she could. She even did a walking race with him! There were many times that she wondered why Spike never got his chance to have a forever home. While it became clear Spike had some anxiety (especially with rain and thunderstorms) he was one of the sweetest dogs she had ever met. 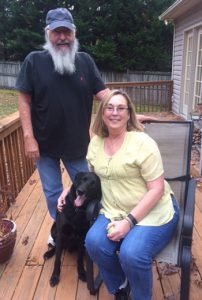 Fast forward to mid- November 2016, when a kind couple, Don and Nancy Underwood, decided to donate all their old dog belongings to the SPCA since they no longer had any dogs. While there, they happened to walk through and see the dogs up for adoption. Fortuitously, instead of being at the foster home, Spike (now 8.5 years old) was in the kennel that day. When Mr. Underwood saw Spike, he instantly fell in love. As they met Spike and interacted with him, they realized they were meant to be Spike’s forever home!

And now here we are, where our story unfolded in our clinic this week. The Underwoods had brought previous dogs to Lawndale, so to them, it was a natural choice for Spike to become a patient at Lawndale. As my technician that day, Robin, and I worked with Spike, we could clearly see he was already bonded to his new owners. Understandably, he was also very nervous about being in the clinic. Wary of the new surroundings and people, anyone could read his body language and know he would prefer to be back at his new home.

I remember being in conversation with the Underwoods and watching Spike stare at the door handle leading to the lobby (hoping it would open any second!). One of our kennel attendants walked past the room on the opposite side, and then she did a double take and came into the room. Spike turned, ran over to her, sat down, and wagged his tail. In a very clear change of body language, Spike was begging for this girl to love on him and pet him. As she sat there and hugged Spike, she told the owners her name was Natalie. She explained that prior to coming to Lawndale a few months ago, she had worked at the SPCA. This was the same Natalie who gave Spike so much extra love and affection while he was with the SPCA! 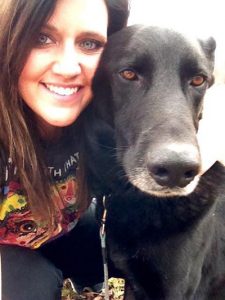 Standing there watching and listening, I confess I was moved deeply. There was a thoughtful couple in front of me who opened their home to an older dog. We know that many, many times older pets are passed up in the shelter for younger ones. Then, there was Spike –we don’t even know what his life was like prior to age 7, but we do know he had been living in a shelter / foster situation for over a year and a half not having a forever home….and now he had found the perfect family. On top of that, we had a loving, caring kennel attendant at Lawndale who just happened to be the one who provided Spike with love and enrichment while he was living without a family at the SPCA. But the thing that moved me the most that day was the dramatic change in Spike’s demeanor when he turned and recognized Natalie. Clearly, even though it was completely out of context for Spike, he knew exactly who she was. Natalie and Spike had formed a bond during their time together at the SPCA, and I could see on both of their faces the joy they brought to each other.

I love this story. The Underwoods found the perfect fit for them in Spike. Spike finally gets his forever home, and he shows us how older animals can make amazing pets too. We already knew we had hired a great kennel attendant in Natalie – and this story just proved it even more. Above all these things – this story is a testimony to the deep ties of the human-animal bond. 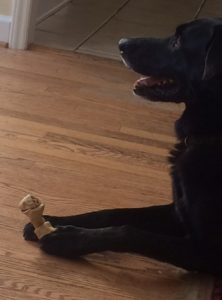