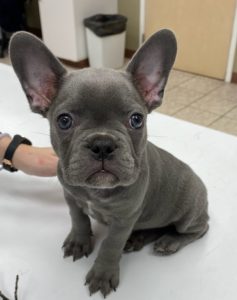 New puppies and kittens are a ton of fun! They take a lot of love, persistence, and dedication to keep them on track and healthy and we are lucky to be able to see their progress every day in our line of work. Young pets can get mischievous, however, and find themselves in a bit of trouble! I find that it happens with puppies more often than kittens, but puppies certainly don’t have a corner on the market of mischief with unexpected results.

Leo Trakas made his first puppy visit to Lawndale Veterinary Hospital on November 1 of this year and looked great! Everything checked out well and Leo got his distemper/hepatitis/parvo/parainfluenza (DHPP) booster and his owner was asked to provide a stool sample for a puppy fecal evaluation – routine, routine, routine! Leo went home and we expected to see him back for the next visit in his puppy series in 3-4 weeks.

On the afternoon of November 8, Leo was enjoying some time outside, playing with his family. He had been having a great day and when the kids and Leo came back into the house, Leo started to show signs that something was very wrong. Ms. Trakas noticed that Leo seemed to be putting a lot of effort into his breathing and then he started vomiting. Due to an overwhelmingly booked schedule, we were not able to immediately see Leo at Lawndale Veterinary Hospital, but Ms. Trakas continued to monitor Leo closely through the afternoon. 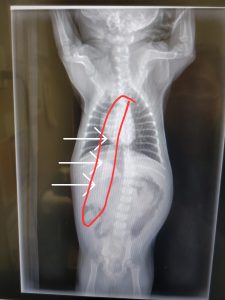 Radiograph of Leo with stick.

Ms. Trakas became increasingly concerned that Leo was in distress and rushed him to Lawndale toward the end of the day, where Dr. Crawford had just finished up his last scheduled appointment. Dr. Crawford immediately noticed the odd breathing pattern that Leo was exhibiting and performed a thorough physical exam. There were no physical abnormalities noted and Leo’s lungs were clear, so Dr. Crawford received permission to take radiographs to see if there were any abnormalities that were detectable on x-rays. The heart and lungs looked normal, but there was a strange linear structure noticeable on the x-rays. 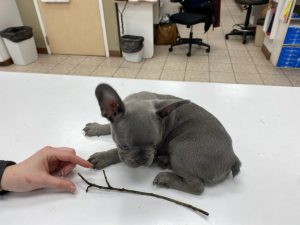 Leo with the stick that was removed.

At that point, Dr. Crawford performed a deep palpation of the back of Leo’s throat and was able to feel a stick in the back of the throat. Dr. Crawford sedated Leo and was able to remove a stick, approximately 6 inches in length (!) from Leo’s esophagus. Once the stick was removed, Leo was started on antiemetic medication to prevent nausea and vomiting and a course of antibiotics to protect Leo against infection in case the stick had ulcerated the lining of his esophagus and/or stomach. Leo recovered without complication and has been back to see Dr. Crawford for his vaccination boosters and has had no problems following his attempt to eat an entire tree in one sitting!