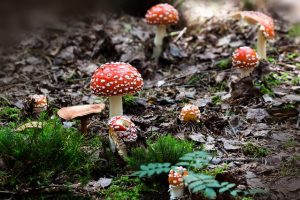 Have you ever noticed that more mushrooms start popping up around your yard when it has been raining a lot? With the weather forecast predicting a fair bit of rain coming up, we thought it was a good week to talk about pets and poisonous mushrooms. If you don’t take anything else away from this blog, at least remember this: pets should not be allowed to ingest mushrooms around the yard.

According to North Carolina State College of Agriculture and Life Sciences, North Carolina has one of the greatest mushroom species diversity of any state in the United States. Many of these mushrooms are not poisonous. For those that are poisonous, they can basically be sorted into 8 different groups based on mushroom toxin type (6 of which have potential veterinary significance). Some cause only mild gastrointestinal upset such as vomiting or diarrhea. However, other mushroom species may cause more severe symptoms and even death. For example, Amanita species and Galerina species produce toxins such as amatoxins that target the gastrointestinal tract, kidney, and liver. The pet may not show symptoms immediately after ingestion, but then gastrointestinal signs develop. As the condition progresses, the vomiting can cease and the patient may appear to be recovering. However, the kidney and liver failure will soon develop, which can ultimately lead to death.

What If Your Pet Has Ingested a Mushroom?

If mushroom poisoning is suspected, identifying the mushroom species can help guide treatment and prognosis expectations. At Lawndale, when dealing with a suspected mushroom poisoning, we generally try and work together with someone experienced in mushroom identification while we are also treating the animal.

If you are going to collect mushrooms for someone to identify, there are some key points to remember:

The thing about mushroom identification that not everyone realizes is it can take a bit of time to accurately identify a mushroom. Visual identification alone is often difficult or impossible. The person identifying the mushroom will need to understand where the mushroom was collected. For example, was it growing on the ground, on a tree stump, or on another plant? What trees were nearby (certain mushrooms grow near certain trees)? He or she will inspect the mushroom visually for color as well as structural clues. The cap, stalk, and gill structure can provide important pieces of information. A spore print can also be made to aid in identification. The stem of the mushroom is cut off just below the mushroom cap. The mushroom is then placed with the gills down on a piece of white paper. The spores that fall out onto the paper will provide the spore color, which is an identification clue. Once all of this information is put together, species identification can likely be reached by an experienced mycologist or mushroom enthusiast.

In order to prevent mushroom poisonings, pets should not be allowed to eat any mushrooms. Checking your yard regularly can be an important way to find and remove mushrooms before your pet discovers them. Remember, if your pet may have eaten a mushroom, it’s best to act quickly and come to the veterinary clinic without delay.