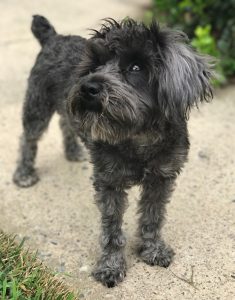 Background: It was September 6, 2016, and Shakira was still a puppy. She came into Lawndale Veterinary Hospital to be spayed. However, Dr. Jelovich found some abnormalities on Shakira’s pre-surgical bloodwork, and Dr. J decided to cancel the surgery that day.

Bloodwork Abnormalities: Shakira was anemic. Her blood sugar was low. She had decreased protein levels (both albumin and globulins), decreased blood urea nitrogen (BUN), and a mild increase in a liver value called alanine aminotransferase (ALT). Dr. Jelovich also added an additional blood test to measure bile acids (another liver test), and they were significantly elevated.

Diagnosis: These particular labwork changes in a young puppy are suggestive of a liver shunt, and Shakira was ultimately diagnosed with a congenital portosystemic shunt.

Case Progression: Shakira was treated with medications such as metronidazole and lactulose initially. Over time Shakira began to develop clinical symptoms from the shunt, including gastrointestinal signs, and then seizures. Shakira was referred to Carolina Veterinary Specialists where they used ultrasound to confirm the diagnosis of a portosystemic shunt.

What is a congenital portosystemic shunt (PSS)? In order to understand a PSS, it is important to first understand the normal portal venous system. Typically, blood from the abdominal organs (intestines, spleen, and pancreas) is drained by the portal vein directly into the liver. Here, the liver will work to metabolize and detoxify this blood prior to it going into the entire body’s (systemic) circulation.

During fetal development, sometimes an irregularity in the venous system occurs that allows a portion of the blood that is draining the abdominal organs to be shunted from the portal venous system to the systemic circulation without passing through the liver. This is called a portosystemic shunt. When this happens, some of the nutrients, toxins, and proteins that are absorbed from the intestines are allowed to enter the entire circulatory system before they can be metabolized/ detoxified by the liver. Furthermore, the liver may not develop to a normal size (or function normally) because it is also being deprived of some nutrients. The shunt can be inside the liver (intrahepatic), or outside the liver (extrahepatic). The presence of a PSS can lead to a condition called hepatic encephalopathy. Basically, hepatic encephalopathy means that the central nervous system begins to function differently due to the liver not functioning correctly.

What is the treatment for a PSS?
Medications can be used to help decrease the gastrointestinal toxins that will enter systemic circulation. For example, antibiotics can decrease the bacteria in the gastrointestinal tract, which will decrease toxin production. Lactulose can be used to increase bowel movements which will increase the removal of stool and therefore also decrease the amount of bacteria. A high quality, low protein diet can also be helpful in managing clinical symptoms. Anti-seizure medications can help control seizures if they occur. While these medical therapies may help control symptoms related to a PSS, they will not correct the problem. Shunts can ultimately be corrected surgically, especially when medical therapy cannot control the symptoms.

How is Shakira doing now?
Shakira has responded well to medical treatment, so she has not moved forward with surgical correction. In fact, Shakira was doing great when she was in for her last annual exam with Dr. Jelovich! You can learn more about portosystemic shunts by visiting the American College of Veterinary Surgeons website.