Home
Blog
Diseases & Conditions
The Heat Is On… Lady Washington: A Chihuahua With Pyometra (Uterine Infection) 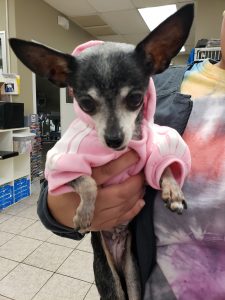 Background: Lady Washington, a 12-year old, intact female chihuahua, was not feeling well back in the early fall. She had been less energetic than usual, laying around for the previous several days. Although Lady seemed to be drinking her usual amount of water, her appetite was markedly decreased, and she had started vomiting three days prior to presentation at Lawndale Veterinary Hospital.

On initial presentation, Dr. Burnett examined Lady and found her to be quiet, alert and responsive. Physically, she was in thin body condition due to her recent anorexia, had moderate dental disease, and a grade 2/6 heart murmur. Lady’s temperature was normal and she did not appear to be dehydrated. Lady’s vulva was swollen, but Dr. Burnett did not observe any evidence of vaginal discharge and her owners had not noted vaginal discharge at home.

Dr. Burnett requested bloodwork, which showed that Lady’s neutrophils were markedly increased and there were bands present. Neutrophils are the white blood cells that help fight infections and inflammation. Their numbers will typically increase in response to infections, injuries, inflammation and stress. Bands are immature neutrophils and they are present when the body has had to signal the response of these white blood cells before their maturation is complete, such as in the case of severe infection or sepsis. In addition, Lady’s blood glucose level was low, which is another sign of severe infection. Since Lady had never been spayed, Dr. Burnett was suspicious that she may have developed a uterine infection after her last heat cycle. A brief ultrasound confirmed Dr. Burnett’s suspicion of a uterine infection, or pyometra, as she could see that the Lady’s uterus was grossly enlarged and full of fluid.

How does a pyometra occur? After a female dog has been in estrus (commonly called “in heat”), the level of the hormone, progesterone in her body remains increased for several weeks. This hormone drives changes in the uterus that prepare it for a potential upcoming pregnancy, including thickening of the endometrial lining and increasing glandular secretions as well as inhibition of uterine contractions, to prevent the expulsion of developing embyros. If the female goes through several consecutive estrus cycles that are not followed up by pregnancy, the lining of the uterus remains thickened and difficult to properly slough. These changes set up a very favorable environment for bacterial infection.

Closed Vs. Open Pyometra: An animal with an infected uterus may show variable clinical signs, based on the type of pyometra. The more common open pyometra is noticeable to pet owners because there will be foul-smelling discharge draining from the uterus to the outside by way of the vaginal opening. These animals may not appear especially ill, although they can show classical signs of illness including, lethargy, inappetence, fever, etc.

If the cervix is not relaxed, a closed pyometra will result. In a closed pyometra, the fluid and debris in the uterus is not able to drain out through the vaginal opening. The material accumulates in the uterus causing it to stretch and become very swollen, causing the abdomen to take on a distended appearance. Animals with closed pyometras quickly become very ill due to absorption of bacterial toxins from the uterus into the bloodstream. In the worst-case scenario, the uterus may become so full that it ruptures, leading to the possibility of septic peritonitis. These animals are typically very lethargic/depressed and may be drinking more than usual and vomiting due to the presence of bacterial toxin accumulation and their effects of the body. This is the most serious case and without immediate and aggressive care these patients will often die.

Back to Lady: Lady was diagnosed with a closed pyometra based on her bloodwork and on the appearance of her uterus on ultrasound and radiographs. This life-threatening condition needed to be treated as soon as possible, to give her the best chance of survival. The preferred treatment is surgical removal of the infected uterus and ovaries (ovariohysterectomy or spay). It was a Friday afternoon, but fortunately, Dr. Waterman had room in her schedule and volunteered to help Dr. Burnett and Lady by performing the surgery. Lady did well during the surgery: Dr. Waterman was able to quickly remove the infected uterus and ovaries, and Lady was transferred to an emergency facility for overnight nursing care, including intravenous fluids, pain medications and antibiotics. Luckily, Lady recovered without complications and is currently doing well at home.

With pyometra, the most common presentation is an older un-spayed female dog, and less commonly cat, who has recently (usually within the past 1-2 months) gone through an estrus cycle, although any intact female is susceptible. Prevention of pyometra is accomplished through spaying. If you have an older intact female pet and are interested in learning more about spaying or pyometra, please contact us and set up and appointment for an examination.