Home
Blog
Diseases & Conditions
This Dog Is Too Sweet! The Case Of Charlie Rhodes, A Diabetic Cockapoo 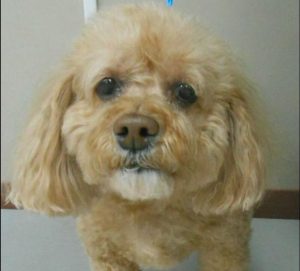 Background: Charlie Rhodes has been a member of the Lawndale Veterinary Hospital community since his first puppy visit in December, 2006. He has had a few medical issues along the way, including chronic skin problems and surgery to repair a torn cranial cruciate ligament in one of his knees. But in March of 2018, Charlie was not feeling well at all: he was lethargic, his appetite was not as hearty as usual, he had lost his playfulness, and he was drinking more and urinating more frequently than normal.

Charlie was brought in on March 7, 2018, to see Dr. Jelovich, so that she could determine how to make him feel better. Along with the increased thirst and urination, Charlie had lost two pounds since his previous visit. Dr. Jelovich recommended diagnostics, including a complete blood count, blood chemistry panel, urinalysis, and a canine pancreatic lipase (cPL) test (which is a rapid screening test for pancreatitis).

The abnormalities that Dr. Jelovich found that day included a strong positive cPL test (a diagnostic finding consistent with pancreatitis), an increased white blood cell count, high blood glucose (hyperglycemia), and a large amount of glucose in Charlie’s urine (glucosuria). There were some additional electrolyte abnormalities and a liver value elevation that indicated that Charlie was affected by multiple health issues, but the findings highlighted above were all consistent with a diagnosis of diabetes mellitus.

What is diabetes mellitus? Diabetes mellitus is an endocrine disease that results when there is a decrease in production or a deficiency of insulin. Insulin is a hormone that is produced by specialized cells in the pancreas, called beta cells, and is integral in the control of glucose (a sugar that is used to fuel activities in the body) levels in the blood. A decrease in, or the absence of, insulin results in an increase in glucose in the bloodstream .

Once glucose levels in the bloodstream reach a certain level (known as the renal threshold), glucose and large volumes of fluid are filtered by the kidneys into the urine. This is the most common reason that uncontrolled/undiagnosed diabetic pets are brought to the veterinarian: the loss of large volumes of fluid and glucose through the urinary tract causes the diabetic pet to drink a lot more and urinate much more frequently – often to the point of having urinary accidents in the house.

In addition, glucose, which is normally the fuel required to run the body, is not able to get into the cells for use or into the liver, for storage. As a result, the body thinks it is starved for energy and starts to breakdown other tissues, such as fat and muscle, for fuel. This breakdown of muscle and fat can lead to weight loss, which is often seen in undiagnosed diabetic pets, even though they may be eating well.

As you can see, the mechanisms of the disease clearly explain the four main clinical signs associated with diabetes:

Case Update:  Dr. Jelovich started Charlie on twice-daily insulin injections. Charlie has proven to be a more challenging diabetic patient because his disease is complicated by additional health issues, but he is doing very well. Charlie currently gets his insulin daily and is in to see Dr. Jelovich for regular exams, diagnostics and glucose curves – these are day long visits in which Charlie’s blood glucose levels are taken every 1-2 hours to determine how well his insulin is working at the current dose.

Any pet can be at risk for developing diabetes mellitus, but it is typically a disease seen in older pets – most dogs are diagnosed between 7-10 years of age and most cats are diagnosed at greater than 6 years of age. At Lawndale Veterinary Hospital, we are highlighting diabetes throughout the month of November, to coincide with National Diabetes Awareness month. If you have noticed any of the following changes in your pet, consider making an appointment for an exam and bloodwork: