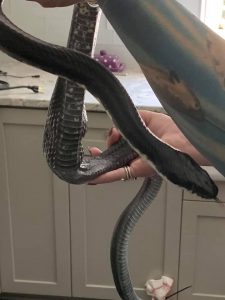 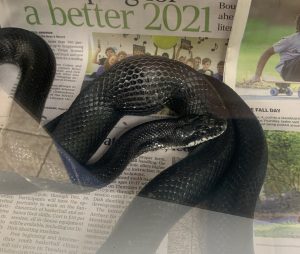 Snake with one golf-ball.

Background: Carole and Mark Bloom love animals of all types and they have been bringing their dogs and their reptile pets to Lawndale Veterinary Hospital for a few years now. They are also licensed reptile rehabilitators with the North Carolina Wildlife Resources Commission (NCWRC) and often receive calls about wild reptiles that need assistance.

In May, 2021, the Blooms received a call from a local resident who had discovered two black rat snakes in a chicken coop. The owner of the coop had been using golf balls placed strategically in the nesting areas as a way of encouraging the hens to lay eggs. Unfortunately for the two black rat snakes who came to be known as Happy and Gilmore, those golf balls looked and smelled enough like the real thing to trick them into taking a meal that could very well have been their last. 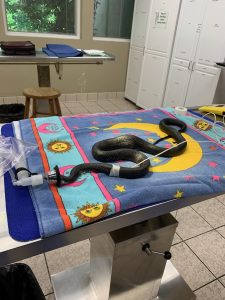 When the Blooms caught the two snakes, one had a single obvious, golf ball-sized lump visible and the other had two golf ball-sized lumps that were readily apparent. The snakes were brought in for Dr. Crawford to evaluate and radiographs were taken. 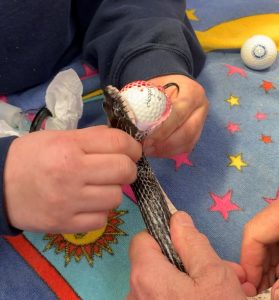 Help Is On The Way: Dr. Crawford got to work planning the surgeries that needed to be done to save the golf-ball ingesting snakes and after having spent the night at Lawndale Veterinary Hospital, the snakes were taken to surgery the next day. The snakes were anesthetized and Dr. Crawford was able to remove the golf balls without complications. 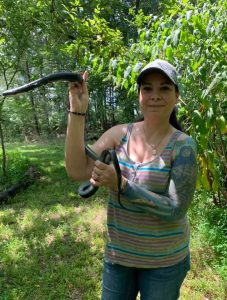 Ready to be released.

After their surgeries, the rat snakes were released to the care of the Blooms, where they recuperated for the next several weeks. Over that period of time, Ms. Bloom noticed big differences in their personalities and named the more gregarious one Happy and the less approachable one Gilmore. Both Happy and Gilmore made full recoveries and were released back into their original area following their extended convalescences.

Take Home Lessons: Happy and Gilmore were lucky, someone noticed their predicament and – fortunately – called the right people with the right contacts. For many other snakes, the ending is not happy; ingesting gastrointestinal foreign bodies can lead to slow, agonizing deaths as they become dehydrated and starve to death. Snakes are ecologically important species that perform many beneficial tasks, including rodent control. If you see a wild animal that you suspect is in trouble, please contact the North Carolina Wildlife Resources Commission with that information so all attempts can be made to get that animal the help that it may need.

Mancini, M. 2016. Eight Inanimate Objects That Have Been Swallowed By Snakes.