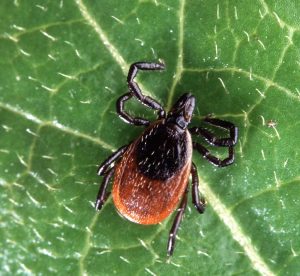 Ticks attach to their hosts and take blood meals that can last for days. While attached, ticks have the potential to transmit a variety of diseases to the host. Tick borne illnesses include Lyme disease, Ehrlichiosis, Anaplasmosis, Rocky Mountain Spotted Fever, and Babesiosis, to name a few. The length of time a tick needs to be attached to transmit a disease varies from one disease to the next. For example, Rocky Mountain Spotted Fever and Ehrlichiosis can be transmitted within 3 to 6 hours, whereas it can take 24 to 48 hours for Lyme disease transmission (capcvet.org). Generally speaking, if you know the tick species, you can also know which tick borne diseases that tick could be carrying. Lone Star ticks (Amblyomma americium) tend to transmit the agents that can cause Ehrlichiosis (among others), and the Eastern black-legged tick / Deer tick (Ixodes scapularis) is known for transmitting the agent that causes Lyme disease (among others). Bear in mind, however, this does not always have to be the case. The Companion Animal Parasite Council (CAPC) has a great overview of ticks including the illnesses that are typically associated with each tick species.

Consider these CAPC statistics for 2016:

What does all this mean for you and your pet?