If you’ve come into Lawndale Veterinary Hospital, you’ve probably met one of our fantastic receptionists named Julie. Julie has an amazingly sweet Golden Retriever named Vandy – you might have even met him or seen some of his pictures on social media. A few months ago, our reception team decided to take a camping trip as a team building experience. Julie thought this would be a great opportunity to give Vandy some additional outdoor time and adventures, so she brought him along to the Eno River campground. 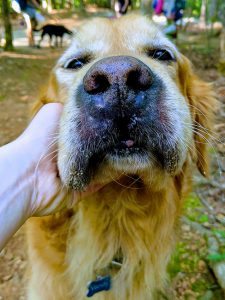 The retreat went great overnight, but on Sunday morning Vandy found a little trouble when he encountered a juvenile copperhead. The copperhead managed to bite Vandy on the face. Within a few minutes Vandy was uncomfortable, would not eat or drink and just wanted to lie around. Julie packed up and left the retreat early to take care of Vandy.

Vandy’s face did swell some from the bite, but thankfully Vandy recovered well from the bite with the help of Dr. McGlothlin, pain medications, rest, and lots of TLC from Julie!

So how common are copperhead bites?

Copperheads are out during the day in the spring and fall, and they are more nocturnal during the summer. Copperheads can easily blend with their environment – especially if they are in leaf debris that matches their coloration or if they are hiding in some tall grass. Copperheads typically live in more forested/ wooded areas.

How serious are copperhead bites? 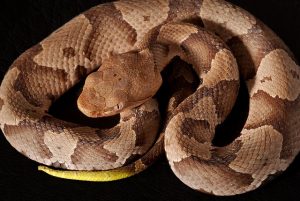 Copperheads are known as pit vipers. The potency of their venom is one of the lowest of all the pit vipers. The seriousness of the bite all depends on how much venom is injected with the bite and how many times the animal is bitten. The amount of venom injected can vary from one snake to the next, and one day to the next. Adult snakes can also have more venom than juveniles to inject.

After a copperhead bites a pet, it’s always important to have the pet checked by a veterinarian. It’s impossible to know right away how much venom was injected or whether it was a ‘dry bite’ that did not release venom.

Copperheads prefer to avoid humans. They will often freeze when startled instead of slithering away – likely because of their ability to blend in with the environment due to their camouflage coloration. Copperheads may only strike once physical contact is made. Even better, copperheads are known for giving a “warning bite” that does not inject a large load of venom. Dry bites can be a common occurrence with copperheads over other pit vipers. (Learn more about copperheads from the World Animal Foundation).

A bite from a copperhead can cause limited symptoms such as pain, bleeding and swelling (like Vandy’s bite). The area can also become infected or tissue necrosis can occur. The venom may also cause effects on the entire body. For example, clotting abnormalities, cardiotoxic effects, neurotoxic effects, and shock can also occur. Thankfully, most copperhead bites are not lethal in pets. 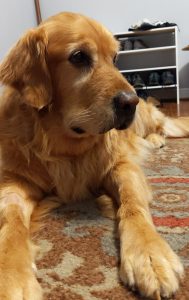 What Can You Do to Help Protect Your Pet From Copperhead Bites?