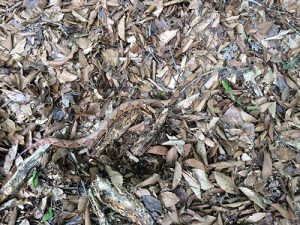 As fall season settles in, we have been hearing of an increased number of copperhead bites in dogs in the Greensboro area, especially at several of the local emergency clinics.

While copperheads are nocturnal during the summer, they are diurnal in the spring and fall(2).  Additionally, they mate in the spring and fall which can increase a male’s level of aggression. Pets can be naturally curious about snakes they might encounter, or they may even stumble upon a snake without realizing it. Given the copperhead’s markings and coloration, these snakes are perfectly suited to blend into the natural surroundings, especially in the fall with all the leaves.

You can help minimize the chances of a snake encounter with some of the following tips:

If your pet is bitten by a snake, you should always seek veterinary care. Non-venomous snakes can create wounds that can become infected. While venomous snakes will sometimes “dry bite” and not inject venom, as a general rule you should consider any venomous snakebite as a medical emergency for your pet. Venomous snake bites can have local effects (e.g., pain, bleeding, swelling, infection, necrosis) as well as systemic effects (effects on clotting, cardiotoxins, neurotoxins, shock symptoms, to name a few). Snake venom effects will be dependent on factors such as snake species, the amount of venom injected, the location of the bite, the number of bites, or the individual patient’s immune response.

We encourage you to be watchful during this fall season as the temperatures fluctuate and snakes have not yet migrated to their dens!