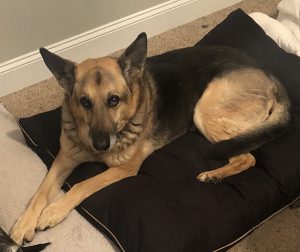 Case History: Satan presented to Lawndale Veterinary Hospital as an emergency on January 27, 2017. The owner reported that Satan had suddenly started stumbling and acting blind. He had been completely normal earlier in the day.

Physical Examination Findings: Dr. Waterman performed a full physical examination, including a neurological evaluation. Satan’s demeanor was quiet, and he was ataxic with weakness in the hind legs. Satan had a head tilt to the left side. Horizontal nystagmus was present, with the fast phase towards the left. An external ear infection was present in both ears. Dr. Waterman was unable to visualize the tympanic membrane (ear drum) on the left side. Based on the physical examination findings, Dr. Waterman suspected Idiopathic Vestibular Disease. However, since an external ear infection was present and she was unable to see the ear drum on the left side, she could not fully rule out an inner ear infection as a cause of the neurological signs.

Treatments: Satan was treated with medications to address the dizziness and nausea that can go along with Vestibular Disease. He was also treated with oral antibiotics and topical ear medications to address the ear infection. Typically only topical ear medications are used for external ear infections, but since it was not fully clear whether a middle ear infection might be present, the oral antibiotics were added as well. The owner was also instructed on how to provide supportive care while the symptoms were ongoing (e.g., keeping quiet and rested, assisting whenever Satan needed to get up or go outside, ensuring Satan continued to eat and drink).

Outcome: Over the next several days, Satan still had some trouble getting up and moving around. He continued to eat well and go outside to use the bathroom. Satan was re-evaluated on January 30, 2017. He was more alert. The head tilt was still present, and the nystagmus was beginning to resolve. Satan was able to walk better, but he was staggering to the left side. Satan was treated with steroids and his ears were cleaned. By January 31, 2017, Satan was able to walk well. The last symptoms to improve were the nystagmus and the head tilt.

Symptoms of vestibular disease can result when any of the components of the vestibular system are affected. This means that vestibular disease can indicate a peripheral (remember the system starts in the middle ear) or central (in the brain) nervous system lesion. Symptoms can include things such as a head tilt (one ear is held lower than the other), circling gait (walking in circles), ataxia (staggering or uncoordinated gait), nystagmus (a rhythmic movement of the eyes that is involuntary) and cranial nerve deficits. Depending on the types of signs present, as well as the directionality of the signs, a veterinarian can start to narrow down what the cause of the vestibular disease might be. Causes of vestibular disease can include things such as inner ear infections, infectious encephalitis (fungal, protozoal, bacterial, canine distemper virus), tumors, low thyroid levels, neurodegenerative diseases, thiamine deficiency, brain trauma, or drug toxicities (2).