Home
Blog
Reptiles
What Do You Do When a Snake Needs a Dentist? Tic Tic Bloom: The Reticulated Python Who Lost a Few Teeth! 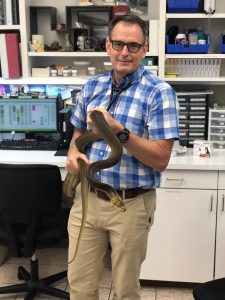 Background: You may remember Tic Tic Bloom, as he was the Lawndale Veterinary Hospital’s Pet of the Month for January 2020. Tic Tic is a three-year old reticulated python and back in August 2019, he came in for a visit with Dr. Crawford. Tic Tic’s owners had noticed a swollen area over the upper right side of his mouth. Although the swelling had not affected Tic Tic’s appetite or interfered with his ability to eat, it had persisted for about six months and sometimes appeared to be scabbed over.

At the time of Tic Tic’s examination, Dr. Crawford noted the swelling and observed multiple draining tracts, which are created when material produced by an area of inflammation drains to the exterior by way of the path of least resistance. At that time, Dr. Crawford started Tic Tic on a course of intramuscular antibiotic injections and requested a recheck examination in three weeks.

When Tic Tic returned for his follow-up visit, the affected area of soft tissue over the upper right side of his mouth had visibly improved; however, there was still some swelling present. Since the swelling had decreased, Dr. Crawford was able to palpate the area and could feel a loose tooth trapped in the tissue. 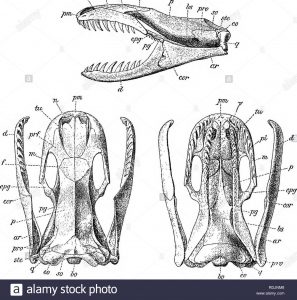 Some Information About Snake Teeth: In order to accommodate large prey items, a snake’s upper jaw is not connected to the lower jaw and the two halves of the bottom jaw are not connected to each other. On each half of the upper jaw, there are two rows of teeth, one located just inside the other, and on each lower jaw there is one row of teeth, for a total of six rows of teeth in a snake’s mouth

While snakes frequently lose teeth when struggling with prey items, it is not a problem for them at all, as they can replace/regrow any teeth that are lost throughout their lifetime. Generally, snakes can be placed into one of four categories, based on the anatomy of their teeth:

Back to Tic Tic: Once Dr. Crawford was able to palpate the presence of at least one tooth trapped in the swollen soft tissue on the right side of Tic Tic’s mouth, he recommended exploratory surgery be performed on the area and Tic Tic’s owners agreed. Tic Tic was sedated and Dr. Crawford made an incision along the affected area over the upper right side of his mouth. He was able to remove a fluid-filled sac and three loose teeth that had been trapped in the space. Once Dr. Crawford was satisfied that he had removed all the sources of inflammation, he closed Tic Tic’s incision and discharged him to recover at home. Tic Tic recovered uneventfully, has replaced the three teeth that Dr. Crawford removed, and is currently doing well at home!

Lopez-Bosch, David. Snakes: Show Me Your Teeth and I’ll Tell You Who You Are.